Old School House Chutneys & Preserves is an award-winning producer of chutneys, condiments and preserves – all handmade in small batches in Chilton Cantelo, Somerset. 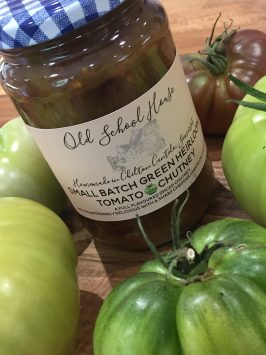 The company was founded following a house move to the county in 2017. After many years of living on the South Coast in Sussex, owner Alan Jeffers moved for a quieter village life in a 19th Century Old School House with the chance to grow his own fruit and vegetables. In fairness, his partner David did all the planting and tending, but with more space than ever before there was soon a glut of everything sown or potted.

Alan quickly sought out recipes from family and friends to find ways of turning the garden’s harvest into chutneys, jams and relishes. In return, friends and neighbours were the lucky recipients of the results and gave some really positive feedback. When people started asking “is there any more?” Alan realised there might be a market and at that point decided to go into small scale production.

The following year, the local farm shop started stocking a few lines of chutney and jam and very soon sold out of everything. And so it was that Old School House Chutneys & Preserves started business.

Now, four years on, with farm shops and delis selling his range of chutneys, marmalades, jam and condiments, most of the products’ ingredients are still grown at home or in the village. This means production remains seasonal, and often in small batches.

“Seasonality is important to me, but sometimes poses a challenge when you mainly use locally grown fruit and veg” says Alan. “Making sure everything is top quality and ready on time, before running out of last seasons’ stock is a fine balancing act.”

Using homegrown and local ingredients is the character of the Old School House brand and despite increasing production hugely each year, their best sellers – Jalapeño Jam, Small Batch Heirloom Green Tomato Chutney, Chilli Jam and Chilli Salt – sometimes still run low on stock. Advanced orders from some outlets has meant that this year is likely to be their biggest one yet and will mean a bumper harvest.